Diplo says he and Skrillex’s act, Jack U, wasn’t booed off the Robot Heart stage at Burning Man for playing DJ Snake and Lil Jon’s Get Down for What while filling in for Seth Troxler. He says Jack U played eight sets during the festival ranging from trap and dubstep at the Question Mark stage to UK bass on the Opulent Temple, dub and classic reggae at Dancestranaught and deep techno and tribal house:

Everyone on stage had a fun moment when we played a few tunes as we were Just killing time while the next dj was setting up.. We weren’t kicked off or booed .. Just wrapped our set up with an inside joke

Diplo and Skrillex are reportedly booed off the Robot Heart stage at Burning Man. The duo, who play together under the name Jack U, fill in with an emergency set after Detroit DJ Seth Troxler refuses to play when his entourage is denied access to the decks. The crowd is happy until Diplo plays DJ Snake and Lil Jon’s Turn Down for What at the end of the set, when they begin booing.

Thank you guys, it is crazy to be here again.

I’m super proud of this song. It is the least commercial thing I ever thought I could create.

Mixmag reports that Skrillex is set to star in a remake of the 1994 Brandon Lee film The Crow. Website TheFrisky.com speaks to a studio representative who says the role has not been offered to Skrillex, and noone has been cast in the remake.

Just the nominations are enough for me. I’d like to say for the EDM community: It’s your guys’ nomination, not mine. 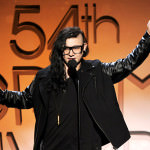 A year and a half ago, I was homeless. I’m not saying it’s about money or anything like that. It’s just crazy how quick things happen. They’re happening right now. I fly to Europe tomorrow morning. It’s just like bam-bam-bam.