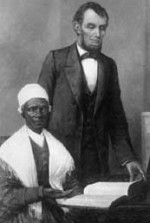 He showed as much kindness and consideration to the colored persons as to the whites — if there was any difference, more.

Truth: I appreciate you, for you are the best president who has ever taken the seat.
Lincoln: I expect you have reference to my having emancipated the slaves in my proclamation.
Truth: I thank God that you were the instrument selected by him and the people to do it. I had never heard of you before you were president.

Lincoln smilingly replied: I had heard of you many times before that.

Truth speaks at the Women’s Rights Convention in Akron, Ohio.

A New York law emancipates all slaves but Truth’s former master, Dumont, had already sold Peter, Isabella’s five-year old child, into slavery in Alabama. Truth sues in court, with the help of the Wageners, and recovers her son. She becomes the first black woman, after several months of litigation, to win such a case against a white man.

Truth escapes with her infant daughter, Sophia, leaving behind her other children because a New York emancipation order did not permit their freedom until they had served as bound servants into their twenties.

I did not run off, for I thought that wicked, but I walked off, believing that to be all right.

A family lets Truth move in with them and settles her remaining one year service account with her master, Dumont, for $20.

Truth’s master, Hardenbergh, dies and her family are separated. Neely, whom Truth remembered as harsh and violent, buysTruth at an auction with a flock of sheep for $100.

By then my father, Bomefree, who had been tall and straight in his youth, had grown old and sickly. No one wanted to buy him. Although my mother could have been sold, they decided to free her so that she could care for my father. The people who bought the hotel allowed my parents to continue to live in the cellar…As the enslaved became old and infirm, they became less useful to their owners, and too expensive to be kept and cared for. They were often, therefore, set free and left to care for themselves. This was especially heartless when their children had also been sold away and were not around to help look after them.

Sojourner Truth is born Isabella Baumfree, one of as many as 12 children of James and Elizabeth Baumfree in the town of Swartekill, Ulster County, New York. Her father is a slave captured in modern-day Ghana; her mother is the daughter of slaves from Guinea. The Baumfree family is owned by Colonel Hardenbergh and lives at the colonel’s estate in Esopus, NY, 95 miles north of New York City.

I was given the name Isabella, and was called ‘Bell.’ My mother was named Elizabeth, and called Betsy and my father was named James…In my father’s youth he was very tall and straight. For that reason he was called “Bomefree,” which was Dutch for tree. We called my mother “Mau-mau” Bett. Mau-mau was Dutch for Mama. My parents were loyal, faithful, hard working and gave Colonel Ardinburgh no trouble. He rewarded their fidelity by allotting them a small plot of land by the mountainside. On it they could crops on weekends and evenings that they could barter on the extra food and clothing for their kids.