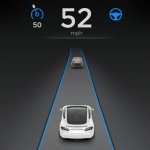 Tesla launches a beta version of Autopilot, which will be available on Thursday. All vehicles from September 2014 will be given the feature. Vehicles will rely on four major sensor systems. Ultrasonic sensors that tell the computer what’s around a 16-ft perimeter of the car; a forward-facing camera that helps determine where the lanes are and what cars are ahead of it, and which can also read speed signs; forward radar that’s used to detect fast-moving objects and which can see through rain, fog, and dust, as well as pulling from GPS and high-precision digital maps. Musk says it’s very important that people “exercise caution” and that they keep their hands on the wheel.

I don’t think that we have anything to worry about with cars driving themselves. They’re not going to take over the world…Each driver is a trainer in how the autopilot should work.