Consumer Reports withdraws its recommendation for the Tesla Model S, after surveying 1400 owners, because of “worse-than-average” reliability. The car previously had the best rating possible.

As the older vehicles are getting up on miles, we are seeing some where the electric motor needs to be replaced and the onboard charging system won’t charge the battery. On the newer vehicles, we are seeing problems such as the sunroof not operating properly. Door handles continue to be an issue…Despite the problems, [Consumer Reports] data show that Tesla owner satisfaction is still very high: Ninety-seven percent of owners said they would definitely buy their car again.

Tesla Motors share price drops 10% before recovering to close off 7%.

in an earnings call Musk reveals a tentative schedule for the Model 3, which is expected to cost $35,000 before government subsidies, saying the company plans to unveil the model in March 2016, and a sale date of mid 2017, but probably later.

I mean, we are hoping to show off the Model 3 in approximately March of next year. Again, like, don’t hold me to that month, but that’s, like — that’s our aspiration.

SolarCity incorporates the Tesla battery into its DemandLogic energy storage system to increase the utility cost savings customers can realize from using stored solar electricity. DemandLogic, which is being adopted by several of the largest retail, biotech and Internet companies in the U.S., allows businesses to reduce energy costs by using stored electricity to reduce peak demand, and can also provide backup power during grid outages. DemandLogic’s management software automates the discharge of stored energy to optimize savings on utility demand charges for customers. 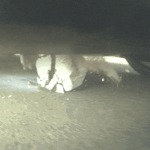 Tesla announces plans to reinforce the undercarriage of about 16,000 cars with high-strength shields to reduce the risk of damage from a crash starting a fire. The NHTSA did not ask Tesla to issue a recall for the Model S. Tesla said the retrofits are voluntary and that federal regulators did not find a “safety-related defect trend.”