What's this? This is an unbiased just-the-facts news summary about Tesla Motors, extracted from the original article by Newslines' contributors. To see the newsline of each topic, click the links below. Learn more 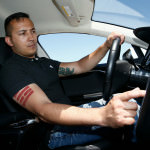 Tesla announces its plans to become one of America’s leading employers of military veterans. Tesla’s workforce is increasing rapidly as it expands production of its Model S, prepares its launch of the Model X crossover SUV and enters new overseas markets. The company now has more than 6,000 employees, and of those, 300 — or roughly 5 percent — are veterans, including its logistics director, former Navy officer Adam Plumpton. An additional 600 veteran candidates are in the hiring pipeline. The Company says:

We want to be known throughout the veteran community as a great place to work.Veterans are a great source of talent for Tesla, and we’re going after it.