I’m glad you cut it. It just didn’t work for me

McGraw wins the Grammy for Best Male Country Vocal Performance and Best Country Song for Live Like You Were Dying. McGraw appears on the cover of People to discuss his music and how’s he thankful for country boys. On his competition:

I’ve always thought George Strait was the coolest guy out there. That’s who my wife would pick. She thinks he’s gorgeous. Him or Kris Kristofferson-she likes him too. He’s got that sexy, outlaw thing going on for her. When we’re around him, she can barely speak.

Chesney and McGraw perform Feel Like A Rockstar at the Academy of Country Music Awards from Chesney’s album Welcome To The Fishbowl.

Chesney releases the single, Feel Like A Rockstar, featuring McGraw, from his album, Welcome to the Fishbowl. Chesney:

It describes my fan base to a T because my road family, we have always worked very hard, but we’ve always lived by the theory of we work really hard and play harder.It seemed to work for us. I think that defines a lot of the people that have spent a lot of summers with us out there on the road. The first time I heard Feel Like a Rock Star, I knew I was gonna record it because it defined everything that we’re about out there on the road.

Chesney and McGraw appears on the cover of People to discuss their tour, basketball, and being there for each other after so many years. On touring together:

As good of friends as we are, we’ve been on different paths for several years. To be able to spend the whole summer together and reconnect is awesome. One of the reasons there’s so much chemistry onstage is that Tim and I both grew up the same way; we both have a lot of the same heroes-George Strait, Bruce Springsteen, Keith Whitley-and we’re both competitive.

McGraw performs One Of Those Nights at the Country Music Awards from his album Two Lanes Of The Freedom. 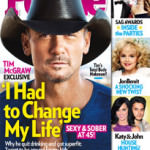 McGraw appears on the cover of People to discuss how drinking affected his life and how he upped his workouts to get great abs.

I wasn’t a beer drinker. I was more a whiskey drinker. And I wouldn’t just have a drink. If I was going to drink, I’d have some drinks. People were worried about me. It was to the point where I felt it was negatively affecting my relationships and getting in the way of things I wanted to accomplish in life.

McGraw performs Southern Girl at the Country Music Awards from his album Two Lanes Of Freedom.

McGraw is a Grammy nominee for Best Country Album for Two Lanes of Freedom.

McGraw performs Lookin For That Girl at the Sports Illustrated Swimsuit: 50 Years of Beautiful Special from his album Sundown Heaven Town.

McGraw debuts City Lights on the finale of The Voice from his album Sundown Heaven Town.

McGraw performs Something Like That and Overrated on the Today show from his album A Place In The Sun.

McGraw speaks about his life as a singer, actor and family man.

Tim McGraw: "I Knew That I Drank Too Much" | Master Class | Oprah Winfrey Network

The country artist stops his Truck Yeah song for a split second and swats an Atlanta fan away. A spokesperson tells Billboard:

Tim was singing out in the audience, and someone firmly grabbed onto his leg and wouldn’t let go as he was moving through the crowd. He instinctively swatted to try and keep them from ripping his jeans … and so he could get to more fans who were trying to slap hands with him before the end of the show. He didn’t know who had grabbed him and was trying to keep his pants from being torn.

A 25-year-old woman claims that she was attacked by three men,when she was separated from her friends after leaving McGraw’s July 18th show that was held at the Faster Horses Festival. The incident reportedly occurred in the parking lot of the Michigan International Speedway in Brooklyn. Police say that the rape was reported at 12:10 a.m:

She was attacked in the dark near the parking area, and there didn’t happen to be anyone around in that parking area. She was taken to Allegiance (Health) where they checked for injuries, and a rape kit was done and sent to the Michigan State Police lab to check for DNA.

McGraw sees no conflict in his upcoming participation in a concert to benefit Sandy Hook Promise after critics call the show a gun-control fundraiser. He says he can both be a gun owner and support the concert. He is taking part in the concert because a band member is friends with a parent whose child was a victim of the shooting at the Newtown school.

Let me be clear regarding the concert for Sandy Hook given much of the erroneous reporting thus far. As a gun owner, I support gun ownership. I also believe that with gun ownership comes the responsibility of education and safety — most certainly when it relates to what we value most, our children. I can’t imagine anyone who disagrees with that. The concert is meant to do something good for a community that is recovering.