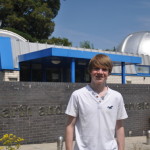 Wagg discovers a new planet 1,000 light years from Earth by finding a tiny dip in the light of a star as a planet passed in front of it while reviewing data collected by the Wide Angle Search for Planets (WASP) project at Keele University. Wagg’s planet, which has yet to be given a name but bears the catalogue number WASP-142b, is in a class of exoplanets known as hot Jupiters, so-called because they are large like Jupiter.

It’s really exciting. I was amazed. It’s definitely something you can tell people about.

Wagg is believed to be one of the youngest people ever to discover a new planet. A straight-A student, the high schooler says he plans to study physics in college.