He is willing to help a woman who believes she can get across Nebraska in a wagon with three insane women as passengers. The truth is he agrees to help her out because she rescues him from a very dangerous situation, and so he is indebted to her, even though she finds out that she wouldn’t have made it on her own.

Jones is nominated for Best Supporting Actor at the 85th Academy Awards for portraying Thaddeus Stevens in Lincoln.

Jones is nominated for Best Actor at the 80th Academy Awards for portraying Hank Deerfield in In the Valley of Elah. 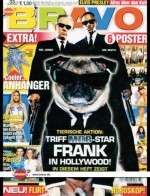 Smith and Jones appear on the cover of an August 2002 issue of Bravo magazine. Smith and Jones appear on the cover of the August 2002 issue of Cinema magazine.