Friends and colleagues pay tribute to Parker and Ward at a memorial service at the Jefferson Center in Roanoke. Station manager Jeff Marks:

Adam and Alison saw it as their mission to awaken us to what was good and fun in life…I want to play softball with Adam again. And I want to see Alison dance. And I will, in the wonderful memories they gave me and gave us.

Gardner wakes from her medically-induced coma and tells her husband that she couldn’t see Flanagan approaching in front of her because of the bright lights of the camera. She says that Flanagan first targeted Parker, before turning to shoot Ward. She remembers seeing him wearing body armor. Husband:

Then he shot three times at my wife, and she was trying to dodge everything. He missed twice, and then she dove to the ground and curled up in a ball, and that’s when he shot her in the back. I don’t think she ever felt like she was in danger after she got up and walked to the ambulance after being shot, but she didn’t know the extent of her injuries at that point, but the surgeon told me that a couple of centimeters and she wouldn’t be walking and a couple of centimeters more and she wouldn’t be alive.

Once Flanagan left, Gardner started walking away in search of help – despite suffering a bullet wound in her back. An ambulance took her to Roanoke Memorial Hospital where she underwent emergency surgery, followed by additional surgery to her abdomen, where a kidney and part of her colon were removed. She is expected to make a full recovery.

Andy Parker says that gun laws must be strengthened:

Everybody that she touched loved her, and she loved everybody back. I’m not going to let this issue drop. We’ve got to do something about crazy people getting guns.  [I will do ] whatever it takes to get gun legislation to shame legislators into doing something about closing loopholes and background checks. This is not the last you’ve heard of  me. This is something that’s Alison’s legacy that I want to make happen.

Gardner has emergency surgery and is in stable condition in Carilion Roanoke Memorial Hospital in Roanoke. 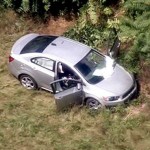 What's this? This is an unbiased just-the-facts news timeline ('newsline') about Vester Lee Flanagan, created by Newslines contributors. Make it grow it by finding and summarising news. Learn more