Four other relay athletes post better times and are selected for Team South Africa. Pistorius’s time of 46.25 seconds is outside the 45.55 Olympic qualification standard. He says the legal battle with the IAAF kept him from training:

I have to be realistic. I haven’t run in about a year. London 2012 is a more realistic target. Sprinters usually reach their peak between 26 and 29. I will be 25 in London and I’ll also have two, three years’ preparation.

Pistorius appeals to the Court of Arbitrations for Sport and is represented by the law firm Dewey & LeBoeuf. Statement:

I am very appreciative of the Court of Arbitration for Sport setting a schedule that will allow a decision in time for me to pursue my goal of qualifying for the Olympics. This case is important not just to me, but to all disabled persons who just ask for the chance to compete fairly on the sporting field with able-bodied athletes. 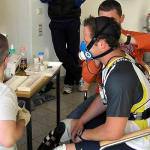 The IAAF bans Pistorius from competing at the Summer games in Beijing. Among other findings, it determines that his blades allow him to use 25% less energy than an able-bodied athlete. (Full findings here). Pistorius says he will appeal:

I feel that it is my responsibility, on behalf of other disabled athletes, to stand firm. I will appeal [against] this decision at the highest levels, while also continuing with my quest to race in the Paralympic Games and hopefully the Olympic Games.

The federation announces that it will conduct a full biomechanical analysis of Pistorius to see whether his blades give him an advantage. 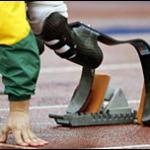 The IAAF assesses whether Pistorius will be able to compete in the Olympics under its new rule. It is concerned about the energy his blades release, the length of stride pattern they allow and the fact they do not release lactic acid. Pistorius:

IAAF spokesman Nick Davies says the blades give him a three-to-four meter stride:

[That is] not humanly possible.

As part of its assessment it films Pistorius competing against able-bodied runners at the Norwich Union British Grand Prix in Sheffield and the Golden Gala race in Rome the previous Friday. Davies:

We will be filming Oscar in race situations, then measuring things like his stride length, how he distributes his speed and his energy over the whole lap.