What's this? This is an unbiased just-the-facts news summary about 2014 Gaza Conflict, extracted from the original article by Newslines' contributors. To see the newsline of each topic, click the links below. Learn more 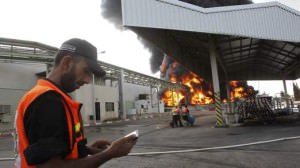 Two-thirds of Gaza is without electricity after a missile strike hits the fuel depot of the city’s only power plant. The depot was hit during the heaviest bombardment in the last three weeks. According to a spokesman for Gaza’s electricity distribution company, the power plant was hit by shells fired from an Israeli tank, a claim which could not be verified.