What's this? This is an unbiased just-the-facts news summary about 2014 Gaza Conflict, Israel Defense Forces, extracted from the original article by Newslines' contributors. To see the newsline of each topic, click the links below. Learn more 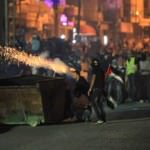 Two people are killed and at least 90 injured as a protest involving an estimated 10,000 people breaks out in violent clashes with soldiers and border police at a checkpoint in Qalandiya, between Jerusalem and Ramallah. Israeli forces go to heightened alert and mobilize different units in and around Jerusalem to ‘deal with disturbances.’ Army spokeswoman:

There are thousands of rioters there. They are rolling burning tyres and throwing Molotov cocktails and fireworks at soldiers and border police.