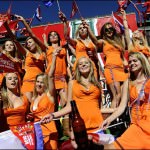 FIFA finds more instances of copyright infringement related to the 2014 World Cup than it did a year ahead of the 2010 tournament. It says it has taken action against around 100 companies that don’t have permission to use the protected phrases. Most of the cases involve small local companies misunderstanding the rules of trademark use, and don’t require legal action.

A marketing official says FIFA and the local organizing committee have a responsibility to protect the sponsorship rights sold to 20 companies whose combined involvement is $1.4 billion in cash payments and services, such as Coca Cola, which is providing 5 million beverages, and Hyundai, which will deliver 1,400 vehicles to transport officials and teams in the 12 host cities.