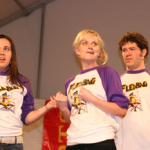 the improv comedy troupe, My Mothers Fleabag. Her parents believed it would distract her from her studies, but Poehler continued in it regardless.

To do improv, you have to somewhat fearless or crazy or have a death wish, but I think it attracts some certain people and I think that [My Mother’s Fleabag] is a great organization. And in great organizations there is a spirit that is very hard to capture an people borrow it and leave some of themselves behind. It’s a thing thats bigger than ourselves and it’s calming.