Hathaway responds after being a punchline in Schumer’s Trainwreck. In the film, Schumer’s character tells her boyfriend that after he wins a charity award, he’s acting like Hathaway on Oscar night. Hathaway won an Academy Award for best supporting actress for her role in Les Miserables. Hathaway appears on the cover of the January 2015 issue of Elle Quebec magazine. Hathaway poses topless with rhinestones covering her chest for the November issue of Harper’s Bazaar. Hathaway discusses the backlash from her last Bazaar cover in November of 2013 and the “Hathahaters.”

What are we supposed to do—pretend like it didn’t happen? People treated me a certain way. But I’ve grown from it. This whole thing has made me a way more compassionate and loving person. And I don’t feel sorry for myself.

Seacrest interviews Hathaway during On Air With Ryan Seacrest and questions her about her role in the film Rio 2.

The movie is wonderful it’s better than the first one and it truly, truly is a lovely wonderful film that parents and kids can enjoy.

Fallon and Hathaway sing Broadway versions of rap songs such as Gin and Juice and In Da Club.

Hathaway wins the Academy Award for Best Performance of an Actress in a Supporting Role for her portrayal of Fantine in the film adaptation of Victor Hugo’s novel Les Misérables. Christopher Plummer presents the award.

Here’s hoping that someday in the not too distant future the misfortunes of “Fantine” will only be found in stories and nevermore in real life. 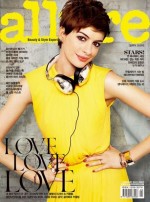 Hathaway appears on the cover of the February 2013 issue of Allure Korea magazine.

Hathaway is nominated for Best Supporting Actress at the 85th Academy Awards for portraying Fantine in Les Miserables.

I started crying and I started laughing, and then doing both at the same time. And then the calls and the texts starting coming in. Hathaway appears on the cover of the January 2013 issue of Glamour magazine. She talks about how she isn’t going shopping for a while.

I looked at my life when I was on my honeymoon, which was gorgeous, and I thought, I need nothing. I’m not buying myself a single thing for the rest of this year. Hathaway marries Shulman in Big Sur, California. The 150-plus guests are treated to tunes from the San Francisco-based jazz trio Americano Social Club. She wore no jewelry and to accessorize, she dons a 1920s-inspired headband attached to a simple veil. A guest says:

The wedding was lovely and Anne looked gorgeous. It was just friends and family. No movie stars. There were only a few people in the business there, like her stunt double. Hathaway appears on the cover of the July 2012 issue of Allure magazine. She talks about being Cat Woman in The Dark Knight Rises and not wanting to do birth scenes.

My issue with it was that having not experienced motherhood myself, I didn’t know how I was gonna feel on the other side about giving birth. And by the way, I could pop a kid out and think, Oh, well, I really should have done that movie

Seacrest interviews Hathaway during On Air With Ryan Seacrest about her roll in the film One Day.

I read the script, fell in love, flew to London to meet with Lone Scherfig, but I was off that day and I really felt like I wasn’t articulating why I loved Emma so much and how I hoped to play her.

Hathaway is nominated for Best Actress at the 81st Academy Awards for portraying Kym Buchman in Rachel Getting Married.

I didn’t want to get ahead of myself and wanted to guard against being disappointed. I tried to be very cool and sleep through it. I got in from Washington, D.C., and decided to spend the night at my parents’ apartment and had anxiety dreams all night, getting up every hour. At 8:30 we were all sitting on the couch. I think my parents cheered louder than anyone. 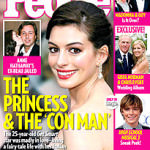 Hathaway appears on the cover of People after discovering her boyfriend lied and betrayed innocent people out of millions. Source:

I think she felt she had a major catch who was a powerful, wealthy European businessman. Everything was Don’t worry, I’m the man. Essentially, the knight in shining armor. Unfortunately, the armor was some crap metal that tarnishes.

Everyone makes sacrifices for their job; the movie’s not saying that you don’t have to work hard. The movie is saying that if you’re going to work hard, then make it worth it, believe in what you’re doing. There’s nothing wrong with the fashion industry. What’s wrong is changing yourself for something you don’t really care about just to get somewhere faster. Everyone has limits and Andy discovers what hers are.

The couple pay a forty pound bond for their marriage in Stratford-upon-Avon. Hathaway is eight years older than Shakespeare, and there are allegations that she is pregnant at the time of marriage.

What's this? This is an unbiased just-the-facts news timeline ('newsline') about Anne Hathaway, created by Newslines' contributors. Help us grow it by finding and summarising news. Learn more