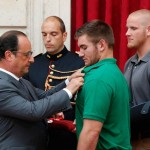 In a ceremony at France’s Elysée Palace, French President Hollande makes Roseburg, Stone and Sadler Chevaliers of the Legion of Honor, France’s highest decoration. Hollande says the four men had averted a catastrophe when they tackled and trussed a heavily armed man who had opened fire on the train. He says their coolness under fire was a lesson to all of France — and the world.

You have shown that in the face of terror, you can resist. So you have given us a lesson of courage, of determination and therefore of hope. There were over 500 passengers on that train. Ayoub el-Khazzani possessed over 300 bullets. And we realize now how close we were to a tragedy and a massacre.