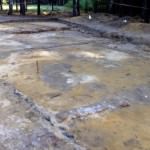 that the Sobibor gas chamber has been uncovered at the end of an eight-year archeological dig in Poland. The center says that 250,000 Jews perished at the site between April 1942 and October 1943. Dr. David Silberklang:

It is important to understand that there were no survivors from among the Jews who worked in the area of the gas chambers. Therefore, these findings are all that is left of those murdered there, and they open a window onto the day-to-day suffering of these people.

Researchers discover thousands of personal effects of prisoners at the site, as well as a water well used by the Jewish inmates that was filled with waste while the Nazis were dismantling the camp. Dr. Silberklang:

We will now be able to know more precisely what the process of murder was in the camp, and what the Jews went through until they were murdered. Additionally, finding the gas chambers and their capacity will enable us to estimate more precisely the number of people murdered in Sobibór.