The Company claims that, despite reports, women are actively using the site.

Recent media reports predicting the imminent demise of Ashley Madison are greatly exaggerated. The company continues its day-to-day operations even as it deals with the theft of its private data by criminal hackers. Despite having our business and customers attacked, we are growing…Last week, a reporter who claimed to analyze the stolen data made incorrect assumptions about the meaning of fields contained in the leaked data. This reporter concluded that the number of active female members on Ashley Madison could be calculated based on those assumptions. That conclusion was wrong…Last week alone, women sent more than 2.8 million messages within our platform. Furthermore, in the first half of this year the ratio of male members who paid to communicate with women on our service versus the number of female members who actively used their account (female members are not required to pay to communicate with men on Ashley Madison) was 1.2 to 1. These numbers are the main reason that Ashley Madison is the number one service for people seeking discrete relationships.

Effective today, Noel Biderman, in mutual agreement with the company, is stepping down as Chief Executive Officer of Avid Life Media Inc. (ALM) and is no longer with the company. Until the appointment of a new CEO, the company will be led by the existing senior management team. This change is in the best interest of the company and allows us to continue to provide support to our members and dedicated employees. We are steadfast in our commitment to our customer base. We are actively adjusting to the attack on our business and members’ privacy by criminals. We will continue to provide access to our unique platforms for our worldwide members. We are actively cooperating with international law enforcement in an effort to bring those responsible for the theft of proprietary member and business information to justice.

The pattern was reflected in another data field, too. This one, called chat_last_time contained the timestamp for the last time a member had struck up a conversation using the Ashley Madison chat system. Roughly 11 million men had engaged in chat, but only 2400 women had.

Overall, the picture is grim indeed. Out of 5.5 million female accounts, roughly zero percent had ever shown any kind of activity at all, after the day they were created. The men’s accounts tell a story of lively engagement with the site, with over 20 million men hopefully looking at their inboxes, and over 10 million of them initiating chats. The women’s accounts show so little activity that they might as well not be there.

I deeply regret my affiliation with the site, which has caused a great amount of stress and heartache to my wife and children. I want to publicly apologize to each of them for this embarrassment and my blatant disregard for their feelings. I indulged curiosity about the site, but never went beyond that.

Rader issues a video saying that he set up an account on Ashley Madison two years ago – before he started vlogging – with the intention of having an affair, but ‘never came to close’ to actually being with another woman. He says that both his spouse and God have forgiven him for his actions:

I did make the account. I made the account two years ago. This is an issue that is in our past. This was before I got onto YouTube. I brought this to our church at the time, when I first started… this was brought to my wife’s attention. She has forgiven me for this mistake that I have made in opening the account. I sought forgiveness to God and he has forgiven me. So I’ve been completely cleansed of this sin…I need to be clear that I never had an affair with anybody ever while I’ve been married. This account was opened out of pure fleshly desire and just simple curiosity.

I have forgiven Sam and I stand behind him. This is in our past and it’s unfortunate that it’s being dug up right now but our marriage is worth fighting for and it always will be…Marriage is the real deal.

Former Chicopee mayor Bissonnette confirms on his Facebook page that he signed up on the Ashley Madison website in 2010 using his city email, but he denies using the service.

Canadian users launch a US$578 million class action lawsuit against Ashley Madison alleging ALM failed to protect the privacy of “many thousands of Canadians” whose names, emails, home addresses and message history were posted online by hackers for public viewing. The lead plaintiff in the suit is a disabled Ottawa widower. His lawyers said he joined the website “for a short time in search of companionship” after losing his wife of 30 years to breast cancer, but that he “never met anybody in person from the site.” Lawyers:

In many cases, the users paid an additional fee for the website to remove all of their user data, only to discover that the information was left intact and exposed.

More than 700 Australian government official and police officers emails are exposed in the Ashley Madison data breach. A breakdown of the statistics show most heavily affected branches are the defense and education departments with 408 and 504 email addresses found respectively. A total of 81 email addresses are found for police officers.

The stolen database of 32 million people who used Ashley Madison exposes more than 15,000 email addresses that end in the .mil domain, those serving in the U.S. military. Adultery is a prosecutable offense under the Uniform Code of Military Justice, that can lead to a year in confinement and a dishonorable discharge.

Gawker reports that data from the Ashley Madison hack reveals a credit card under the name Joshua J. Duggar was used to pay for an account on the site. The address listed along with the card was that of the Fayetteville, Arkansas, home his grandmother Mary owns. That credit card was used to purchase two different monthly Ashley Madison subscriptions, costing $986.76 from February 2013 to May 2015. He reportedly opened another account using his address in Oxon Hill, Maryland, where he lived when he was lobbying as part of his job as the executive director of the conservative Family Research Council. That account was registered in July 2014, and was paid monthly through May 2015. The account details sexual preferences:

Conventional Sex, Experimenting with Sex Toys, One-Night Stands, Open to Experimentation, Gentleness, Good With Your Hands, Sensual Massage, Extended Foreplay/Teasing, Bubble Bath for 2, Likes to Give Oral Sex, Likes to Receive Oral Sex, Someone I Can Teach, Someone Who Can Teach Me, Kissing, Cuddling & Hugging, Sharing Fantasies, Sex Talk. 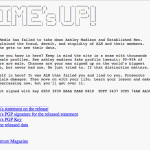 Avid Life Media has failed to take down Ashley Madison and Established Men. We have explained the fraud, deceit, and stupidity of ALM and their members. Now everyone gets to see their data. Find someone you know in here? Keep in mind the site is a scam with thousands of fake female profiles. See ashley madison fake profile lawsuit; 90-95% of actual users are male. Chances are your man signed up on the world’s biggest affair site, but never had one. He just tried to. If that distinction matters. Find yourself in here? It was ALM that failed you and lied to you. Prosecute them and claim damages. Then move on with your life. Learn your lesson and make amends. Embarrassing now, but you’ll get over it.

The site’s owner, Avid Life Media, said its investigation into the breach is still ongoing.

This event is not an act of hacktivism, it is an act of criminality. It is an illegal action against the individual members of AshleyMadison.com, as well as any freethinking people who choose to engage in fully lawful online activities. The criminal, or criminals, involved in this act have appointed themselves as the moral judge, juror, and executioner, seeing fit to impose a personal notion of virtue on all of society.

The Hacker group Impact Team breaks into Ashley Madison’s dating website and threaten to release the private information of 37 million clients, including sexual fantasies and other personal information from the site’s database. Impact Team claim the attack is in response to a profile-erasure service Avid Life Media (the site’s parent company), offered for $19. The hackers claim that the company made $1.7 million in revenue last year on that service, which it alleges doesn’t actually scrub personal information. They also demand the closure of Established Men, another of website. The company does not provide information on how much data might have been compromised, and an Avid spokesperson said she couldn’t provide any more information at this time. Company:

We were recently made aware of an attempt by an unauthorized party to gain access to our systems. At this time, we have been able to secure our sites and close the unauthorized access points. We are working with law enforcement agencies, which are investigating this criminal act.

What's this? This is an unbiased just-the-facts news timeline ('newsline') about Ashley Madison, created by Newslines' contributors. Help us grow it by finding and summarising news. Learn more