What's this? This is an unbiased just-the-facts news summary about Australia, Cartoonists Rights Network International (CRNI), Manus Immigration Center, Papua New Guinea, extracted from the original article by Newslines' contributors. To see the newsline of each topic, click the links below. Learn more 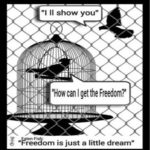 An Iranian refugee held at an Australia’s Manus camp in Papua New Guinea wins a political cartooning award from CRNI for his work depicting life inside the camp.
Ali, whose pen name is Eaten Fish, has chronicled his three-year detention on Manus Island as he struggles with obsessive compulsive disorder, post-traumatic stress disorder and debilitating panic attacks. CRNI:

Eaten Fish has been able to keep up a stream of cartoons documenting the unspeakable abuses and excesses of the guards and administrators of the camp. For this he has been the subject of beatings, deprivation of food, and even worse degrading treatment by the guards.

The Australian government denies that the refugee has been mistreated.