Hiris Ali is interviewed for the New York Time Women in the World section. On the book:

I didn’t publish this book so that people would all agree with its contents, but I think it’s going to shift the discussion with both Muslims and non-Muslims, shift the discussion away from where we’re stuck—“Is this Islamic, or is this not Islamic?”—to “Let’s agree that it is Islam,” which is what the reformers do. They’re saying we have problems. And then the next and most urgent question is: “If it’s Islamic, what do we do about it?”

In 2010, I suggested that if you are a good Muslim with a good conscience, go and look for a better God, and I think that was juvenile of me. I shouldn’t have said that, and it just doesn’t work that way for all. But in 2015, I think the perception might be surprising again. I think there’ll be more support within Islam than last time.

On her call to change Islam:

Every single individual in the history of Islam who has proposed meaningful change has been dismissed as a heretic. Mainly silenced. Banished, killed, threatened. One of the points that I discuss is the obligation that every Muslim must command what is right and forbid what is wrong. Innovating the Faith is seen as heretical. But that doesn’t mean that it cannot be changed. If you have a large, meaningful enough crowd who adopt the heresy, then you have reform of Islam. 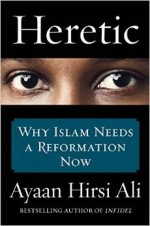 Hirsi Ali releases her fourth book, Heretic, a plea for a Muslim Reformation as the way to end the horrors of terrorism, sectarian warfare and the repression of women and minorities. She says that some of Islam’s key teachings are incompatible with the values of a free society and proposes five amendments to Islamic doctrine: dethroning Mohammad as an infallible prophet, and scrapping a literalist reading of the Quran; elevating the rewards of human life over those of eternal life (which delegitimizes martyrdom); replacing the most barbarous parts of Sharia with practical man-made legislation; promoting concerted action to stigmatize those tempted to take religious law into their own hands; and, last, repudiating the theological warrant for jihad.

Hirsi Ali is interviewed by Stewart on The Daily Show:

Talk of reformation in Islam has been underway for a while, Yes, there is a great deal of violence in the name of Islam, but there is a emerging and incredibly imporat minority of reformers who are risking their lives to get this change done. And I stand with them. I hope you stand with them.

Hirsi Ali gives two talks, moderated by Kay, as part of the Ringling College Library Association Town Hall lecture series, in Sarasota, Florida. She talks about the story of three British teenage girls leaving their homes in England and flying to Turkey to join ISIS,  and how she felt felt when she was a radical Muslim in her teenage years:

If I’m being really honest, there was a time [in my life] when I would have gone, because [in Islam] we are told that the greatest honor is to do things for the sake of Allah, and [if you do], he will reward you. That’s totally consistent [throughout Islam], and even moderate Muslims agree. The bedrock is there, even if your family is not radical. If you are a proper Muslim, you submit to Allah.

And her hope for youth:

What we are seeing now is that Islam is going through a crisis. But if you take one step back and analyze what’s [really] happening, you’ll see that after the Arab Spring, there are young people organizing, questioning, coming out and saying ‘we don’t want to hate, we want to love.’ I think there is a chance a reformation has started. 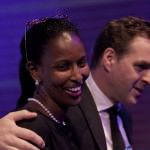 Ferguson and Hirsi Ali marry in Boston, Massachusetts. The wedding is attended by Henry Kissinger, who was the subject of a biography by Ferguson. None of Ferguson’s three children are understood to have been at the ceremony.  Hirsi Ali is due to give birth to the couple’s first child in the next few months.

Hirsi Ali speaks about their relationship for the first time in upmarket Dutch women’s magazine Libelle.

Recently I have found new love – Niall Ferguson. He is a British historian and TV presenter. It is a complicated love affair. I am enormously in love with him. It is the best feeling in the world. I would love to become a mum soon. I have turned 40 and I hope it is still possible for me to have a baby. But he is involved in divorce proceedings and there are children involved. We are also both travelling a lot for our jobs. We have to put in a lot of effort to make sure we see each other. I am happier than ever. I feel so much better in my life after all the things I have gone through.

Ferguson splits up with Douglas, his wife of 16 years, after a string of adulterous affairs, for his mistress, Hirsi Ali. Ferguson confessed his affair to Douglas last summer. His wife tries to save the marriage, flying to Manhattan to be with Ferguson in November. Douglas has met Hirsi Ali on a number of occasions. Ferguson has consulted lawyers in the U.S., while Douglas plans to file for divorce and has consulted a London-based law firm. According to a source in the Daily Mail, Ferguson has been unfaithful eight times over the past five years.

Ferguson and Hirsi Ali meet at a party for Time magazine’s ‘100 Most Influential People In The World’ issue in New York in May, 2009. They are introduced by Belinda Luscombe, the magazine’s art editor. Luscombe:

I think that is where they met for the first time. In all the years I have known Ayaan, she’s never had a boyfriend. She’s gorgeous, but with a fatwa, it’s tricky to find guys.

What's this? This is an unbiased just-the-facts news timeline ('newsline') about Ayaan Hirsi Ali, created by Newslines contributors. Make it grow it by finding and summarising news. Learn more