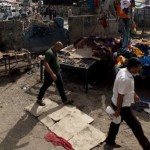 ISIS say they were behind two suicide bombs in Baghdad that killed at least 23 people and wounded more than 60. Among the dead were police and civilians. The suicide bombers hit police checkpoints in market places during morning rush-hour. The bombers were said to have been on foot and wearing explosives vests. Four people are killed in a third blast in a nearby district, but it is unclear who was behind it.

What's this? This is an unbiased just-the-facts news timeline ('newsline') about Baghdad, created by Newslines contributors. Make it grow it by finding and summarising news. Learn more