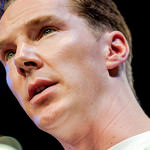 At the Hay Literary Festival 2014, Cumberbatch performs several dramatic readings of various notable correspondences – including a letter written to a suicidal fan by Iggy Pop, a note from Richard Avedon to his father and interactions between Bessie Moore and British serviceman, Chris Barker.
However, the finale of the evening comes when the actor performs a reading of a letter written by author Kurt Vonnegut to a teacher that had ordered 32 of the school’s Vonnegut books burned due to their “obscene language” and subject matters.
Add your comments below...