To The Ends Of The Earth 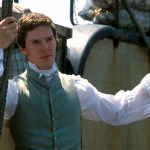 The BBC casts the actor to take on the role of Edmund Talbot in the mini-series To The Ends of The Earth. This film is based on a trilogy of novels written by William Goulding – Rites of Passage, Close Quarters and Fire Down Below. It follows the life of a haughty young man as he embarks onto a journey into manhood and learns some of the harsher lessons in life out on the open sea.