In an interview with Innovation Hub, Feld says rather than moving to Silicon Valley, young entrepreneurs should build a business where they live and get opportunity to chase them.

I’ve had a deeply held belief that you can build a startup community in any city — it’s phenomenal to see it happening all over the world…In the book Startup Communities I talk about The Boulder Thesis…There are four principles. The first is that the leaders of the startup community have to be entrepreneurs. the second is that those entrepreneurs have to have a very, very, long-term view, at least twenty years. The third is that they have to be inclusive of anyone who wants to engage in the startup community at any level. The fourth is that you have to have activities and events happening all the time that actually engage people in actually doing entrepreneurship, rather than just talking about it.

Feld announces that he and Batchelor are funding the first year of an an entrepreneur-in-residence program at Colorado University, Boulder. The EIR program is a way to help founders and entrepreneurs who aren’t US citizens get the necessary visas to stay, work, and build innovative companies in the US without having to worry about immigration issues. The program uses a loophole in immigration law that allows visas to be granted to foreign graduates working in some capacity at a local institution of higher learning, while they are also building a startup. Foreign entrepreneurs will be employed part time by CU-Boulder, making them eligible for visas sponsored by the school.

I’ve gotten worn out on the federal level immigration fight. I’m happy to continue to participate in advocacy for change around visas for entrepreneurs, but I’ve decided to focus my energy, and money, on exploring and experimenting with state-oriented solutions.

Feld says that his biking days are over after a crash that leaves him unconscious and in the hospital.

I have no memory of what actually happened. The last thing I remember, after much prompting, was turning left onto Iris from Broadway. While the 911 calls were all for a hit and run, there’s no real evidence of that since my bike is generally fine and nothing, including me, looks like it was hit by a car. At this point, I’m guessing that I took the turn too wide and must have hit the curb and lost control of the bike. Maybe I squeezed my breaks and went over my handlebars. Or maybe I crossed over into a parallel universe for a little while and when I came back landed on my face.

I’m doing ok today. Nothing is broken and according to the hospital I don’t have a concussion. I’ve very banged up. I’ll probably have two black eyes, I have a sprained thumb, and lots of cuts and bruises everywhere. My face is very swollen and my head is very bumpy and weird from all the swelling. I have a persistent headache, no matter how much Advil I take. My glasses are destroyed so I’m wearing some old ones, which probably isn’t helping…My biking career, short as it was, is officially over.

I would have traveled a lot more around the world when I was younger. I travel for work in the U.S. a lot, but I’m actually quite uncomfortable in much of the world other than Europe, because I just didn’t travel that much to other parts of the world, and I think that especially today, with the globalization of business, and the amount of entrepreneurship happening everywhere in the world I think that inhibits me because I’m uncomfortable and I’m a little nervous about it. There’s some places I don’t want to go to because it seems to hard at this point in my life.

I’ll put energy into a startup community without knowing what I’m going to get in return. It’s not altruism. I expect to get something back. But I don’t know what, in what currency, form whom, or over what time period I’m going to get something back…I’ve gotten back so much more by taking a give-before-you-get approach than if I had defined everything transactionally up front.

Feld, who is on the board of Moz, a Seattle-based provider of search-engine and social-media optimization software, writes about the company’s commitment to openness:

Feld points to Moz’s Moz’s 2013 Year in Review, which gives insider-level numbers of the company’s operations, despite the company managment’s disappointment with their results.

…when you talk about being transparent, it’s often useful to have a standard of ‘real transparency’ to compare yourself too. I’d put Moz at the top of that list in my book.

In a LinkedIn article Feld explains how he increased his productivity by replacing business travel for videoconferencing.

Feld talks with Morton about dealing with depression and how diet and lifestyle changes such as cutting out coffee, alcohol and not traveling too much help, and how his wife supports him.

I’ve had three [depressive episodes]. One in my mid-20s that overlapped with the time I sold my first company. Which was a succesful company, but I got very bored near the end of it. And another in my mid-30s right around 9/11, through the end of the year. I was in New York at 9/11 and was never in any harm’s way, but the pressure….my business world was really under siege because it was the Internet bubble collapsing, so I was really struggling with lots of things in lots of different places. And most recently, in the first half of this year basically, where I really didn’t acknowledge that I was depressed.

Feld and Batchelor are interviewed about Startup Life. In Startup Life: Surviving and Thriving in a Relationship with an Entrepreneur, Feld and Batchelor, share their personal experiences of living in an entrepreneurial relationship. The book offers strategies for balancing entrepreneurship with relationships, including waiting for a good time for real conversation, life dinners, quarterly vacations off the grid, no TV in the bedroom and always answering your phone when your beloved calls. 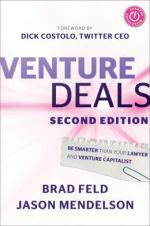 The Second Edition of Venture Deals is released. The book builds on the first edition by outlining the essential elements of the venture capital term sheet, introducing readers to the various participants in a funding situation, and includes strategies to getting to a fair deal
.

Feld leaves the Zynga board. He is replaced by Paul, a partner at Spring Ventures.

Feld appears in this digital short 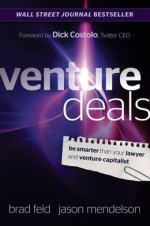 Feld and Mendelson compile blog posts with new material to create a guide for entrepreneurs seeking Vventure capital financing. The book includes analysis of the Term Sheet, details the differnt stages of the fundraising process, explores the venture capital ecosystem and gives tactics for negotiations.

My favorite entrepreneurs to fund are those that have had at least one success and one failure. While it is a cliche, failure teaches the big lessons. Most importantly, entrepreneurs that have some failure under their belt have humility and perspective that I think is deeply useful in the creation of the company. Feld and Cohen identify the key issues that first-time entrepreneurs encounter, and offer proven advice from successful entrepreneurs who have worked with the TechStars program. The authors organize the most critical issues into seven themes: Idea and Vision, People, Execution, Product, Fundraising, Legal and Structure, and Work and Life Balance. Many of the examples are personal experiences from the entrepreneurs themselves. Throughout the book, they debunk numerous myths about startups and reveal some surprising truths. In partnership with the White House Startup America initiative, Techstars leads the development of the Global Accelerator Network. The Network consists of only the highest quality independently owned and operated organizations from around the world that utilize a mentorship-based startup accelerator model.

In an interview, Feld talks about the challenges for early-stage investors when raising funds:

There’s a sense among entrepreneurs that there’s a set of things that you need to do in response to what you hear from from venture capitalists that increase your chances of getting funding. Particularly challenging for first time or early-stage entrepreneurs that are going through that cycle, where they get feedback that says, ‘if only you had this, or if you only had that…’ And usually what that means is that the person you are talking to is probably not going to fund you and you should look harder for somebody that’s actually interesting funding you at the stage that your at.

Foundry Group, along with Union Square Ventures invests in Zygna’s Series A-1 investment of nearly $5 million. Zynga makes social games that run on mobile devices and desktops. Its most famous product is Farmville, a social game that allows Facebook users to create a virtual farm.

I was investing in Boston, NYC, the Bay Area, and Seattle as an angel investor, and I was traveling across the country all the time. My wife is a writer. She grew up in Alaska. She told me she was moving to Boulder and that I could come with her if I wanted to. We were married at the time so I chose to come with her [laughs]. My view was, if I didn’t like Boulder, I’d keep going west, except I never really wanted to live in the Bay Area. But we got here, loved it, and decided to never look back. 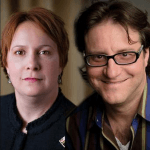 After buying their wedding rings at the Pay ‘n Save, Feld and Batchelor exchange vows at the top of top of Ester Dome in Fairbanks, Alaska. They are officially married in the Boulder County Courthouse on June 21, 1996.

Feld technologies becomes formalized when Feld and Jilk become partners. One month later they incorporate as an S-corporation. Together they build the company into one of Boston’s leading software consulting firms.

Feld: Brad, even though he could code, was out in the world trying to make rain. That’s oversimplifying what we did, but it was in large part our role in the business. There is no way I could make rain at all, and that is still not my strength. And, although Brad is capable of working on code, he was not motivated by it. He liked going out and finding clients, and having high level conversations.

While while a sophomore at MIT he works part-time as a developer for a Dallas company. His work includes writing a management system for a very large dental practice with over 30,000 customers an engagement means he has to commute frequently between Los Angeles and Boston during school.

They paid me a royalty on all the software I developed for them, so I learned the value of being in business for yourself at an early age.

Felds lack of experience is his biggest challenge. After losing money for a few months in a row he fires staff, cuts costs and resets the business to grow more slowly and profitably. He credits his father and other mentors who helped him stay out of trouble.

Feld gains Bachelor of Science and Master of Science degrees in Management Science at Massachusetts Institute of Technology .  He chooses MIT in part because his eighth-grade girlfriend wanted to go there.