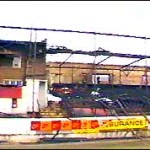 At least 52 people are known to have died and many are missing after fire engulfs the Bradford City football stadium. Hundreds of people are in hospital suffering from burns. Most of the dead are children or elderly people crushed in the rush to escape the inferno. Only one of the victims has been identified so far, former club chairman Samuel Firth, aged 86, who dies in hospital from burns.