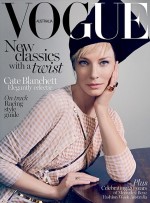 Blanchett appears on the cover of the April 2015 issue of Vogue Australia magazine. She talks about parenthood.

Children certainly teach one about compromise. I think before having children the idea of compromise rubbed shoulders with weakness or deception in some way.

Blanchett adopts a baby girl named Edith Vivian Patricia Upton with her husband. This is their fourth child.

Blanchett is interviewed by GMA about her roles as the the stepmother in Cinderella in the live-action retelling of the 1950 Disney animated classic.

I said it wasn’t a fairy tale that I actually gravitated towards, because I found the central female character really passive. 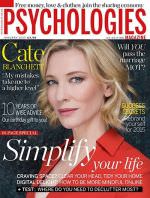 Blanchett appears on the cover of the January 2015 issue of Psychologies UK magazine. She talks about ageing and her acting career.

You have to know how to evolve with age without trying to hang on to your younger image of yourself from the past. 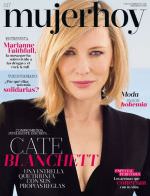 Blanchett appears on the cover of a December 2014 issue of Mujer Hoy magazine. Blanchett appears on the cover of the December 2014 issue of Porter magazine. She talks about the media, Emma Watson, and being judged by other moms.

You know there’s an extra judgment. You know they’re really observing how you parent. They don’t know that you cram everything in to make space for your kids like any working parent. Playing the lead in a film where you shoot for three months away from home is not an easy thing for me when my children are in school and my husband is running a theater company. They assume you have a nanny and a driver and a chef. Who gives a sh*t whether I do or not? The fact is, I don’t, but you know there is a certain circle of people – and we all get insecure – who then ask, ‘Why can’t she brush her hair?’ You just have to shrug that off. 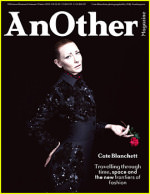 Blanchett appears on the cover of the Autumn/Winter 2013 issue of AnOther magazine.

Blanchett wins the Academy Award for Best Actress in a Leading Role for her portrayal of a formerly wealthy woman who moves in with her sister, in Woody Allen’s Blue Jasmine. Daniel Day-Lewis presents the award.

And me, I’m here accepting an award in an extraordinary screenplay by Woody Allen. Thank you so much, Woody, for casting me. I truly appreciate it. I’m so very proud that “Blue Jasmine” stayed in the cinemas for as long as it did. And thank you to Sony Classics, to Michael and Tom, for their extraordinary support, for so bravely and intelligently distributing the film. And to the audiences who went to see it, and perhaps those of us in the industry who are still foolishly clinging to the idea that female films with women at the center are niche experiences. They are not. Audiences want to see them and, in fact, they earn money. So… The world is round, people! 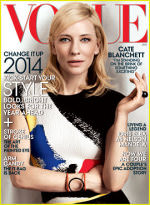 Blanchett appears on the cover of the January 2014 issue of Vogue magazine. She talks about her relationship with time and not knowing how old her mother is.

I guess if I analyze it I could work it out in relation to my own age, but it’s a piece of information that my brain won’t let me compute.

Blanchett is presented with her own star on the Hollywood Walk of Fame for her work in the category of Motion Pictures. Friends David Fincher, Kathleen Kennedy, and Steven Spielberg serve as guest speakers at the ceremony.

Blanchett is nominated for Best Supporting Actress at the 80th Academy Awards for portraying Jude Quinn in I’m Not There.

Blanchett is nominated for Best Actress at the 80th Academy Awards for portraying Queen Elizabeth I in Elizabeth: The Golden Age.

What's this? This is an unbiased just-the-facts news timeline ('newsline') about Cate Blanchett, created by Newslines' contributors. Help us grow it by finding and summarising news. Learn more