Habre is charged with numerous war crimes that resulted in the deaths of 40,000 people. This is the first time he is before a court for crimes that span a period of twenty years. Victim:

I want to look him in the face and ask him why I was kept rotting in jail for three years, why my friends were tortured and killed.

At least 19 Boko Haram fighters and two Chadian soldiers are killed in combat after the insurgents attack a Chadian village. Chad security:

Boko Haram attacked the post of Konguia at around five in the morning, the army responded, killing 19 Boko Haram members. A soldier died and the attackers fled to Nigeria.

Chadian police says anyone caught wearing a full-face veil will be arrested. Police:

This attack just confirms that a ban on the full-face veil was justified, adding that, it now must be respected more than ever by the entire population. Anyone who does not obey the law will be automatically arrested and brought to justice, 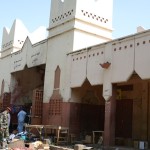 A man dressed in a burqa blows himself up in the main market of the capital N’Djamena, killing 15 people and injuring 80. No group claims responsibility, but Chad blames Boko Haram. Police:

The suicide bomber was a man disguised in a burqa. He tried to enter the market when he was intercepted by police. That is when he detonated the bomb.