A petition (link) to try and force MotoGP officials to drop Rossi’s penalty gets over 380,000 signatures. The petition, started by Nicholas Davis, of Virginia Water in the UK, says:

The integrity of MotoGP is falling into disgrace. You have just condoned dirty racing tactics by punishing Valentino Rossi for pursuing the championship whilst being harassed and sabotaged by Marc Marquez. Justifying your decision by stating that there is no rule to deal with the actions of Marc Marquez is as absurd as saying there is no rule to prevent riders shooting at other riders with guns. 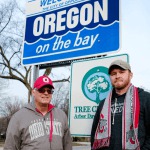 Oregon, Ohio changes its name temporarily to “Oregon, Ohio Buckeyes on the Bay, City of Duck Hunters” following a petition on change.org from Matt Squibb and Mark Rabbitt, who ask that the town show support for the Ohio State Buckeyes against the Oregon Ducks in the College Football Playoff National Championship. City proclamation:

Whereas, the City of Oregon officially adopted its name in 1838 as Oregon Township which happens to be 21 years before the State of Oregon received its statehood in 1859. And The City of Oregon has been petitioned by residents of the city to make it clear that we are not associated with Oregon University Ducks Football.