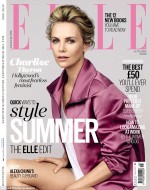 Theron appears on the cover of June 2015 issue of Elle UK. She talks about her relationship with fellow actor Sean Penn.

Putting aside that he’s my partner, he’s the love of my life. For the first time I felt my work was bleeding into my life and that made it hard. 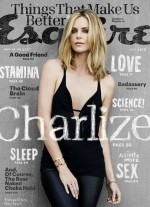 Theron appears on the cover of May 2015 issue of Esquire. She talks about her experiences during the filming of Mad Max: Fury road.

It’s material that’s really frightening — we didn’t have a script. Tom and I are actors who take our jobs seriously. Both of us want to please the directors we work with, and when you don’t know if you can deliver on that, it’s a frightening place to be — and for Tom more than me, because he was stepping into big shoes. Theron appears on the cover of May 2015 issue of W magazine. She talks about her upcoming movie Mad Max and ageism.

I think, like many women, I was judgmental toward women as they aged…Women, in our society, are compartmentalized so that we start to feel like we’re cut flowers and after a while we will wilt.

While working out at her Soul Cycling class, Mowry notices and greets Theron. Theron gives Mowry the cold shoulder and rolls her eyes at her. Theron takes the issue to Soul Cycle management and says that she has a zero tolerance of anonymity during her workout with Mowry around. Soul Cycle refuses to ban Mowry. Mowry:

She wasn’t very nice to me, I said ‘Hi’, and she actually rolled her eyes and said, ‘Oh my God!’.

Penn and Theron are dating after being spotted ringing in the New Year together. The pair are also spotted being very flirty at Penn’s Halloween party.

They were laughing and touchy-feely. Theron appears on the cover of the May 2012 issue of British Vogue magazine. The cover photo is shot by Patrick Demarchelier and styled by Lucinda Chambers.

The Guardian interviews Theron about her earliest memory and when she was the happiest in her life.

[My earliest Memory] Falling into a pool and my mother diving in in her robe to save me. She says I was around two.

[When I was happiest] I couldn’t answer that. There are so many amazing things falling in love, winning an Oscar, moving my mom out to America and just having a simple dinner with great friends.

Theron plays Mary in the movie Hancock. Mary appears to be a normal woman until she reveals she has super powers. In a shocking plot twist, it is revealed that Mary was once married to Hancock and that she also is an invincible alien. She explains that when they are together, they lose their powers. But this rule is raped beyond recognition when the two past lovers start fighting each other for no reason; flying around Los Angeles, destroying buildings and creating comically dark tornadoes. Co-stars include Will Smith and Jason Bateman.

She points out that I’ve only seen half the movie, and that those looks she gives the Will Smith character are because she’s madly in love with him: I put myself out on a limb to create the chemistry between two characters. We see a woman who has the perfect family. She has to choose between husband and child, and unrealised love. It’s about a woman in love and in lust.

Theron discusses why she started an anti-rape campaign in South Africa in an interview with O Magazine.

When someone gave me the facts, they devastated me. I knew rape was a big problem in South Africa, but I had no idea how bad it was. One out of every three women there will be raped in her lifetime. Every 26 seconds, a woman is raped. 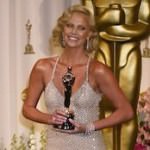 Theron wins an Best Actress Oscar for her role in Monster. Theron was asked backstage about her kiss with co-star Ricci while filming the movie.

I can’t believe I’m talking about this after having won an Oscar!

Theron plays Aileen Wuornos, one of America’s first female serial killers, in this true-life drama, which she also produces. After a difficult and cruel childhood plagued by abuse and drug use in Michigan, Wournos becomes a prostitute by the age of thirteen. She eventually moves to Florida where she began earning a living as a highway prostitute–murdering her clients in order to get money without using sex. Co starring  Christina Ricci, Patty Jenkins and Bruce Dern. On producing:

It’s great. I love it. I love the job. I love them both. They kind of help each other out. It’s not like something new that I’m just learning or trying to do— I mean, I am learning. But I’ve always been very interested in the whole film-making process, and I’ve always been lucky enough to work with filmmakers and producers that have been very encouraging to let me hang around and be a part of that. I like it. I get so emotionally invested in that whole process that the producing part of me is just a natural thing to happen.

Theron plays Stella Bridger in The Italian Job. Stella is out to get revenge on the person that killed her father. She decides to team up with criminal mastermind Charlie Croker to rob her father’s killer of his millions. The intricate plan falls apart when Steve (Edward Norton), a member of the team, double crosses them all. Co-starring Jason Statham, Seth Green, Mark Wahlberg, and Mos Def.

Everybody kind of knew each other somehow, and there wasn’t a moment that we didn’t laugh constantly. I mean we had such an amazing time making this film.

What's this? This is an unbiased just-the-facts news timeline ('newsline') about Charlize Theron, created by Newslines' contributors. Help us grow it by finding and summarising news. Learn more