The Bones of What You Believe 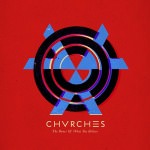 Chvrches release their debut studio album, The Bones of What You Believe. It features 12 tracks including the singles, The Mother We Share and Gun. Lauren Mayberry:

We put a lot of effort as to the record as a whole. We’re not a band that subscribes to the idea that we have 3 or 4 singles as the strongest thing and the rest is just filler. We don’t consider the album to be dead as a format, and we really sequenced the album in that way and spent a lot of time on every song for that reason.