What's this? This is an unbiased just-the-facts news summary about Cristiano Ronaldo, extracted from the original article by Newslines' contributors. To see the newsline of each topic, click the links below. Learn more 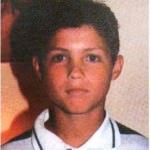 Cristiano Ronaldo dos Santos Aveiro is born to Jose Dinez Aveiro and Maria Dolores dos Santos Aveiro. His mother names him after the former US president, Ronald Reagan. He is the fourth child in the family, the younger brother of Hugo, Elma and Katia. His father works as a kit man for the amateur football club CF Andorinha in Santo Antonio, and asks the team captain Fernao Barros Sousa to be his Cristiano’s godfather. Sousa recalls:

Sousa: One Christmas I gave him a remote-controlled car, thinking that would keep him busy, but he preferred to play with a football. He slept with his ball, it never left his side. It was always under his arm – wherever he went, it went with him.