Lemmy’s funeral is held in Los Angeles with family and colleagues. The funeral features tributes by such luminaries as Slash, Dave Grohl, and Rob Halford. Fans were asked not to attend; a live stream was put on YouTube. A photograph of Motorhead was on display at the service chapel, together with a bank of speakers, Lemmy’s boots and an urn shaped like the singer’s trademark black brimmed hat. The band’s manager:

We all know he would not have stood for anything formal or sombre.

He wasn’t a religious man and praying for a miracle was something he would have viewed as a delusional act, but he was profoundly spiritual. Travel well, my dear father. You are back out on the road for a longest tour to the great gig in the sky.

Lemmy was somebody I just feel so honored to have been friends with. He lived his life the way he wanted to… his music and personality will last forever.

[He was] my hero… the one true rock ‘n’ roller…[He] set such a great example because he was so kind to everyone.

At the end of the service Lemmy’s bass guitar is plugged in to a stack of amplifiers and the volume turned up, with the congregation applauding as feedback from the speakers fills the chapel.

Two songs into their set at the Ullevi stadium, in Gothenburg, Sweden, Grohl misses a ramp and falls of the stage and breaks his leg.

The band continue playing cover versions whilst Grohl seeks medical attention. Grohl then reappears after an hour and continues playing for a further two-and-a-half hours while seated, with a medic holding his leg up.

Esquire interviews Grohl about his fast passed career and what he learned form Kurt Cobain.

No. First of all, I’m so goddamn busy I can’t spend time thinking about anything outside of what I have to do today. There are times where I will sit down, take a deep breath, drop my shoulders, and I just kind of breathe and deflate. But I’m not kidding that happens about once a year for three and a half minutes. In that time, I can really appreciate it. I’m very proud of what I’ve accomplished. But I still don’t think I’ve done my best thing yet. I’ve always felt like that. I’ve always felt like the next record is going to be the last record. You have to say, “This next one is going to be the last one, so we have to make it good.” We’ve said that eight times in the Foo Fighters across 20 years, every record. Just keep moving. There’s so much more to look forward to. That’s something I learned after Nirvana was over. When Kurt died, I had this whole new outlook at life, that we’re all so lucky to be here. You can’t take life for granted. It’s short. It’s fragile. And you don’t know when it’s going to be taken away from you. So the short time that you’re here? You just have to kick ass the whole time and not look back. That’s basically what I try to do. I’m not ready to stop, but if it all ended today, I’d be the happiest person in the world

The trailer for the Foo Fighter’s HBO travelogue Sonic Highways is released . The trailer reveals many of the guest stars featured in the HBO show such as Willie Nelson, Coldplay’s Chris Martin, Kiss’ Paul Stanley, Dolly Parton and Public Enemy’s Chuck D. The series premieres on HBO on October 17th.

Basically, the process is we come to a city and we spend a week and we start recording an instrumental, because I interview all of these different musicians from that city. I talk about the regional relevance of the music from that city, the cultural influence, that ‘made-for-the-sound’ of the music. There’s no way that you can tell the history of a city’s music in one hour, so we have to do it in a way that relates to the band and goes from point A to point B and becomes a song.

Grohl and his wife welcome their third child Ophelia Grohl into the world.

Foo Fighters will release Sonic Highways as November 10. The album contains eight songs, each recorded in a different city with a special guest star. Grohl:

This album is instantly recognizable as a Foo Fighters record. But there’s something deeper and more musical to it. I think that these cities and these people influenced us to stretch out and explore new territory, without losing our ‘sound.’

So once the music and the theme of each city was set, we traveled to each place and spent a week there. We’d get there, start recording and I would just run around town filming and interviewing as many people as I can. I did over 100 interviews. At the end of the week, I’d take all of my transcripts, put them on the floor, sit there with a pen and my journal and I reduce all of these stories into a song. I take from peoples’ backgrounds, anecdotes, the environment — it’s like reporting. It’s musical bungee jumping. 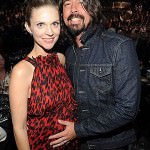 Grohl and his wife are expecting their third child together.

When you have kids, you see life through different eyes.

Nine Inch Nails performs the closing act with Homme, Buckingham, and Grohl. The CBS telecast is cut short and viewers are not able to see the performance. Reznor:

Music's biggest night… to be disrespected. A heartfelt FUCK YOU guys.

Grohl, McCartney, Novoselic, and Smear wins Grammy for Best Rock Song for Cut Me Some Slack.

This song was two hours in my studio…we knocked this out in a couple of hours and to me that’s what rock and roll is all about. 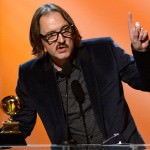 Grohl,  Vig, and  Brown, win the Grammy for Best Compilation Soundtrack For Visual Media for Sound City:Real to Reel. Vig:

I am lucky. When you work with those drummers, they make the recording process easier and fun because they’re really good.

No, this is definitely a Foo Fighters record, and I’m the one steering the ship. With Nirvana there was never any doubt that Kurt was the driving force. Having said that, I think this is by far the most rock record that we’ve ever done. That was our intention, and that’s why we did it with Butch. It has to sound huge. It has to feel big.

The band releases Rope, from their album, Wasting Light. Grohl:

We shot the video… in a big sound stage in Los Angeles. And we had to build this cube out of fabric and wood for the band to play within, and it’s lit from outside, and then, there’s a part in the video where it’s actually revealed that we’re inside this weird white cube. At first it just seems like we’re in this glowing white room from within, and then towards the end, the big reveal is we’re in this room, which is within a massive room.

The band releases The Pretender, from Echoes, Silence, Patience And Grace. Grohl describes the song as:

A stomping Foo Fighters uptempo song, with a little bit of Chuck Berry in it.

Grohl gives interview to Elle Magazine about his most humiliating childhood moment.

In seventh grade, there was this gorgeous, angelic girl named Sandy who moved to Alexandria, Virginia, where I grew up. Within the first few weeks of school, I asked her to go steady. She said yes, and we’d meet at her locker after every period and give each other hickeys. After about two weeks, she said, I’m new here; I don’t want to get tied down, and dumped me.

The band releases their song, Low, from their album, One by One. Black stars in the video for the song with Grohl.

The band releases Times Like These, from their album, One by One. After George W. Bush uses the song in 2004 in his presidential campaign rallies, Grohl:

I was personally offended that George Bush was using Times Like These. I know what I’m singing about and it basically mirrored what John Kerry’s campaign was trying to represent.

The band releases All My Life, from One by One. Grohl:

That song is a little dirty. Use your imagination!

The band releases Breakout, from There Is Nothing Left To Lose. Grohl:

Breakout started off almost as a joke, just a play on the word and taking the piss out of your typical tortured romance love story. It’s supposed to seem kind of ridiculous because I can’t imagine anyone wanting to break off a relationship just because they have acne.

The band releases their song, Learn To Fly, from their album, There Is Nothing Left To Lose. Grohl:

It’s about the search for some sort of inspiration, the search for signs of life that will make you feel alive. It’s actually one of my least favorite songs on the record.

The band releases Walking After You, from The Color And The Shape. Grohl:

It’s an emotional, sappy song about getting dumped.

The band releases their song, Monkey Wrench, from their album, The Color And The Shape. Grohl says the song is about the crumbling of his marriage:

It’s about living with someone and feeling like you’re living in a f–king cell. And then I wound up getting a divorce.

The band releases their song, I’ll Stick Around, from their self titled album. Grohl;

I actually had an anxiety attack because I finally realized that this was good, whereas everything else I recorded over the previous six years I thought was crap. Following the death of Cobain, Grohl forms a one-man project in Seattle; Foo Fighters. Prior to the release of the debut album, which features Gorhl as the soul member, he recruits bassist Nate Mendel and drummer William Goldsmith, as well as fellow Nirvana touring mate, Pat Smear, as guitarist.

What's this? This is an unbiased just-the-facts news timeline ('newsline') about Dave Grohl, created by Newslines' contributors. Help us grow it by finding and summarising news. Learn more