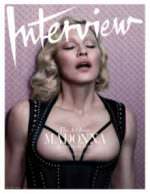 Madonna appears on the cover of the December issue of Interview magazine. Madonna discusses her death obsession with magician David Blaine, who conducts the interview for the magazine.

I became very obsessed with death, and the idea that you never know when death will arrive, so one has to do as much as possible all the time to get the most out of life. And death was a big part of my life growing up. I went to lots of funerals.

What's this? This is an unbiased just-the-facts news timeline ('newsline') about David Blaine, created by Newslines' contributors. Help us grow it by finding and summarising news. Learn more