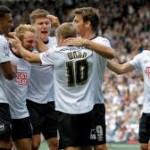 Jamie Ward opens the score for Derby in the 23rd minute of the game. Fulham score in the 54th minute of the second half through Scott Parker but Chris Bryson restores the lead in the 59th minute. Fulham make one substitution while Derby two with John Eustace coming on for Will Hughes but Chris Martin follows through with a double in the 61st and 87th and a minute later Simon Dawkins seals the lead with the fifth. Magath:

The result was very bad and so now is the time to change. A few minutes after the game is not the time to talk about what we will change but for sure there will be new players in. I am not satisfied with the situation. Derby are one of the favourites for this season and you can lose against such a good team but not in this manner