Filming on Season 8 of Doctor Who officially begins 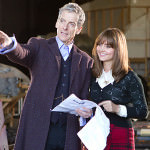 with Capaldi as the Twelfth Doctor. Ben Stephenson, Controller of Drama Commissioning:

Excitement and anticipation fills the air as Peter Capaldi’s Doctor takes control of the TARDIS for the very first time today. It’s going to be one hell of a ride and I cant wait for the journey to start.

Along with the announcement of filming, the first image of Capaldi with co-star Jenna Coleman is released. Filming will continue in Cardiff until August 2014.