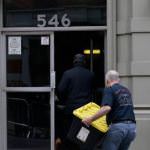 City officials are rushing to decontaminate the New York building where Spencer was living. Police moved people back around 9:15 am as two officers with the Sanitation Department’s Environmental Police Unit arrived on the scene and entered the building through a side entrance. They were joined by several people in plain clothes who exited a truck belonging to the Bio-Recovery Corporation, a full service crime scene cleanup and bio remediation company.

Today we’re expecting a specialized crew [to] come in full protective gear and will clean and sterilize Dr. [Craig] Spencer’s apartment for signs of bodily fluid. [Officials will] confiscate material that might have come into contact with his body such as sheets and pillowcases and bath towels and toothbrushes.

We’ve had neighbors understandably concerned that live right across the street, maybe they live down the hall, maybe they’ve seen him in the local bodega and they’re worried. But the truth is and the facts they need to understand are they’re really not at risk.