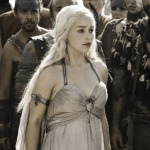 Clarke appears in the series debut, Winter is Coming, as Daenerys Targaryan. In the Free City of Pentos on the continent of Essos, her brother Viserys, played by Harry Lloyd, informs her that she has been betrothed to the Dothraki horselord Khal Drogo, played by Jason Momoa. Viserys warns that she must go through with the marriage as it is part of a bargain by him and Magister Illyrio, played by Roger Allam, to assemble an army for Viserys to challenge for the throne of Westeros. During the wedding, several Dothraki tribesmen fight to the death over slave women. Daenerys is counseled by Ser Jorah Mormont, a Westerosi knight played by Iain Glen, that this is part of their warlike tradition. She is presented with wedding gifts including a white stallion from Khal Drogo, books of stories and songs from the Seven Kingdoms of Westeros by Ser Jorah, and three petrified dragon eggs from Illyrio. Although she is terrified, she consummates her marriage with Khal Drogo in traditional Dothraki fashion.