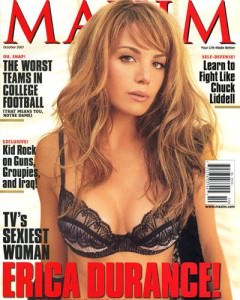 Durance appears on the cover of the October 2007 issue of Maxim magazine. The cover photo is shot by James White.

Durance talks to Layla as part of WWE.com’s Superstar to Superstar series about acting, characters and Madonna.

She’s (Madonna) an independent woman who didn’t take crap from anyone. She went out there and did her thing. But, over the last few years, another woman who I think is unbelievable is Angelina Jolie. She doesn’t apologize for who she is. It’s take it or leave it, and she’s not going to change. I really admire that. They are both people who make their own decisions and stick to them, and I really find that attractive.