No other fighter in 2016 scored such an impressive combination of victories in high-profile bouts against elite opponents — in multiple divisions, on the road — with one of them a contender for fight of the year.

It’s been a great year for myself. I’ve fought on the road twice against two good fighters. The biggest win for me was the Leo Santa Cruz fight. He was a three-weight world champion and most of the press and bookies picked him to win. You can see the difference in how I reacted at the end of both fights. I knew I was a better fighter than Quigg, but the Santa Cruz victory was the one I got more pleasure from. Being even considered as a fighter of the year is a huge honor for me and very humbling. But the thing is, I’m kicking off 2017 with a bang and it has the potential to be even better than ’16. 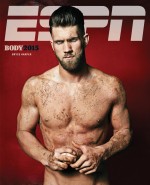 Harper is one of six athletes selected to appear on the cover of ESPN Magazine’s seventh annual Body Issue.

McHendry apologizes for her tirade against a tow truck employee, and ESPN agrees to reinstate her.

My remarks were completely out of line. Under no circumstances is it ever acceptable to speak to another human being in the manner in which I chose that night. That’s not who I am as a person and hope those who only know me from this incident will give me a second chance to prove to you how much I value integrity, character and treating people with respect.

ESPN suspends reporter McHenry for one week after her video showing her reprimanding a parking lot attendant goes viral. The reporter apparently was angered when her car was towed last April 6.

I will sue this place. Yep, that’s all you care about, is just taking people’s money. With no education, no skillset, just wanted to clarify that. Lose some weight, baby girl.

ESPN suspends Olbermann for one week following his Twitter exchange with Penn State students regarding a story about a Penn State charity event that raised more than $13 million to help support children fighting pediatric cancer. Olbermann later apologizes for his posts via Twitter. ESPN:

It was completely inappropriate and does not reflect the views of ESPN. We have discussed it with Keith, who recognizes he was wrong. ESPN and Keith have agreed that he will not host his show for the remainder of this week and will return on Monday. The annual tradition of THON [the fundraising event] and the efforts of the students of Penn State to fight pediatric cancer should be applauded.

.@dave_seidel No, Son. I said PSU students were pitiful. Had nothing to do with fundraising #AlsoPSUReadingComprehensionAppearsToBeWeak

.@dave_seidel Again – get your $ back – you didn't learn how to read. PSU students are pitiful because they're PSU students – period.

I apologize for the PSU tweets. I was stupid and childish and way less mature than the students there who did such a great fundraising job.

All of the people interviewed for the piece, and all those working on it, we all said at one point during the process that we hoped this would sit on the shelf for a long time. It was something that nobody wanted to think about or talk about, but to pay the proper tribute, we knew we had to do it.

Tebow is set to make his debut as an in-booth announcer for ESPN during the Chick-Fil-A Peach Bowl.

I love the game and it’s been an incredible learning experience on the television side this fall. SEC Nation has become my second family. The bowl season simply provided the opportunity to contribute in a different way and share my passion for the game in-motion as a game analyst. I have a great respect for the booth and feel blessed to be joining a team of veterans for the Peach Bowl in my first game role.

Andrew Robert Rector files a lawsuit for $10 million against ESPN and the MLB for comments from ESPN broadcasters Dan Shulman and John Kruk on April 13. Shulman and Kruk talk about Rector taking a nap during the game. Rector’s lawsuit states that he was defamed and suffers from emotional distress as a result of the comments. The lawsuit claims:

The defendant MLB.com continued the onslaught to the point of comparing the plaintiff to someone of a confused state of mind, disgusted disgruntled and unintelligent and probably intellectually bankrupt individual

You are one of the great quarterbacks…and yet you’ve done it all without a mustache. I’ll be honest with you, you look like a succulent baby lamb. Let’s face it all the great NFL quarterbacks have had mustaches…

What's this? This is an unbiased just-the-facts news timeline ('newsline') about ESPN, created by Newslines' contributors. Help us grow it by finding and summarising news. Learn more