A recording of 2 Chainz taking an inebriated woman into a building is released on Instagram.

A video is released showing Snyder snorting what appears to be cocaine. The male in the video is not Jaden Smith. 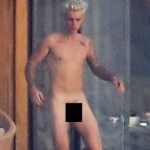 Bieber is photographed nude while on vacation in Bora Bora with Pierce.

NYPD releases a video of Blake’s arrest, that shows an undercover officer tackling him outside a midtown Manhattan hotel earlier this week. In the minute-long video, Blake doesn’t resist and doesn’t appear to the see the plainclothes officer rush him. Blake statement:

The officer tackled me to the ground, handcuffed me, paraded me down a crowded sidewalk, and detained me for ten minutes before he and his four colleagues realized they had the wrong man. The officer … did not identify himself as a member of law enforcement, ask my name, read me my rights, or in any way afford me the dignity and respect due every person who walks the streets of this country. And while I continue to believe the vast majority of our police officers are dedicated public servants who conduct themselves appropriately, I know that what happened to me is not uncommon.