McGregor and Cowley, who flew from Ireland on a private jet, appear in court for less than a minute regarding assault and criminal mischief charges stemming from a backstage melee in April. McGregor and Cowley’s team inform the court that they plan to negotiate a plea. The session is dismissed and the next hearing, where McGregor and Cowley’s team are expected to enter the actual plea, is announced for July 26. After the hearing  a member of the legal team read a statement from McGregor:

I regret my actions that led me here today; I understand the seriousness of this matter and I’m hopeful it gets resolved soon. Thank you, everyone. 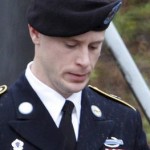 Bergdahl, wearing a dark blue Army dress uniform and closely cropped hair, is arraigned in military court. He defers entering a plea and does not decide whether he wants to face a court-martial with a jury or one with just a judge.

Hastert’s attorney tells  Judge Durkin that Hastert will plead guilty to an indictment alleging he agreed to pay 3.5 million dollars in hush money payments. The plea negotiations mean that many details surrounding Hastert’s prosecution will not be publicly revealed, including the identity of the person Hastert is accused of paying off. Hastert will enter the guilty plea at a hearing on October 28th.

Gonzalez pleads not guilty in the kidnapping and killing of Middleton. Police say Gonzalez lured Middleton into his family’s apartment, sexually assaulted her and strangled and stabbed her in the neck. Her body was discovered inside a recycling bin. If found guilty of all counts, Gonzalez faces a maximum of life in prison.

Fogle pleads guilty to charges of travelling to engage in illicit sexual conduct with a minor and distribution and receipt of child pornography. Prosecutors allege that Fogle knew the pornography had been secretly produced by the former director of his charitable foundation. The court documents say that Fogle paid for sex at New York City hotels with two girls under age 18 — one of whom was 17. (In a discrepancy, the plea agreement refers to the two girls as being 16, and that one of them also had sex with Fogle after she turned 17). One of the girls told investigators she had sex with Fogle three times in November 2012 and again two months later, in January. After their first meeting, Fogle allegedly texted the girl and offered to pay her a fee if she could find him another underage girl to pay for sex acts. During these discussions, Fogle “stated that he would accept a 16-year-old girl, while stating that the younger the girl, the better”. Prosecutor:

This is about using wealth, status and secrecy to illegally exploit children.

When the judge asks whether he has any questions about his rights Fogle quietly answers “no”. Fogle is expected to enter the formal plea at a later date. The agreement released by prosecutors says Fogle will pay $1.4 million in restitution to 14 minor victims, who will each receive $100,000. He will also be required to register as a sex offender and undergo treatment for sexual disorders. The government agreed not to seek a sentence of more than 12½ years in prison, and Fogle agreed not to ask for less than five years, according to court documents. Fogle’s attorney:

Jared also knows that he has a medical problem. He has already sought evaluation by a world class psychiatrist, experienced in these matters and he wills seek appropriate treatment…[Fogle] knows that restitution can’t undo the damage that he’s done.

Fogle is set to plead guilty to possession-of-child-pornography charges as part of a plea deal. Subway reaffirms it has no connection with him.

According to his lawyers, Roof wants to plead guilty to all the crimes he has been charged with, but they have advised him not to enter a plea until prosecutors inform the court on whether or not they’ll seek the death penalty.

Roof has told us he wishes to plead guilty. Until we know whether the government will seek the death penalty, we cannot advise Mr. Roof.

The Magistrate enters a not guilty plea for Roof. Mitchell pleads guilty to helping two convicted murderers escape from a maximum security prison last month. She allegedly provided tools to Matt before the escape by concealing them in hamburger meat. She pleads guilty to first-degree promoting prison contraband and fourth-degree criminal facilitation. She faces a prison sentence ranging from 2 1/3 years to 7 years. She also agrees to cooperate with the investigation and give up her teaching certificate. The judge says Mitchell, who wiped away tears while making the plea, could be released on $100,000 cash or $200,000 bond. Mitchell will be sentenced on Sept. 28.

Sentsov pleads not guilty to terrorism charges relating to giving gifts of food to Ukrainian troops in Crimea, and attending anti-Crimea annexation protests. The Russian government says he is an affiliate of the Ukrainian activist group, Right Sector. The charges carry a penalty of life imprisonment, but prosecutors have offered Sentsov a 20-year term. Sentsov says he was tortured and does not consider the Russian court a court at all.

Webb pleads not guilty to federal racketeering and bribery charges in connection with a massive corruption scandal. He surrenders his passports and is released on $10 million bond. He will be confined to a home in New York and subject to electronic monitoring.

Sanchez pleads “not guilty” in Steinle’s death, saying he found the gun wrapped inside a T-shirt on the Pier, and it went off accidentally. Defense attorney:

This very well could be a completely accidental discharge of a firearm.

The U.S. Bureau of Land Management said Wednesday that a service weapon issued to one of its agents was used in the shooting. The weapon was reported stolen in a car burglary in San Francisco in June. A spokesman for the agency said the matter was under investigation.

Hastert pleads not guilty to violating federal banking laws and lying to FBI investigators. He agrees to submit to a DNA sample if asked, to surrender his passport, to avoid anyone associated with the case, and to remove all firearms from his home. He will remain free on a $4,500 bond.

Judge Durkin offers to recuse himself due to donations he made to Hastert’s campaign years ago, although he says he has never met the former speaker. He gives the parties a day to decide if he should remain on the case.

Appearing before a state Superior Court judge, Roper pleads not guilty to one charge of death and four charges of assault by auto. Bail for Roper remains at $50,000, and if prosecuted he may receive up to 16 years in prison. Roper is accused of operating his truck after going 24 hours without sleep.