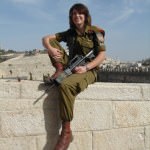 Rosenberg, a Canadian-Israeli joint citizen who served in the Israel Defense Forces before volunteering to fight for a peshmerga division against ISIS, posts a message on her Facebook account to say that she is fine and has not been captured despite ISIS reports:

Guys, I’m totally safe and secure. I don’t have Internet access or any communication devices with me for my safety and security. I can’t reply regularly and only happened to have a chance to log in and see these bu*****t news stories. Ignore the reports I’ve been captured.

The Daily Mail reports that sources in the Kurdish militia also confirm she is unharmed and was not captured.