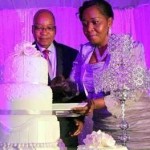 Zuma marries Ngema in a traditional ceremony, known as ‘umgcagco,’ at his rural home. The president’s three existing spouses are among the crowd as he ties the knot with Ngema, a businesswoman with whom he has a seven-year-old son. The couple’s marriage means she will now officially join the presidential household in his home village of Nkandla, where she will live alongside the statesman’s three other wives.