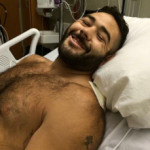 Swift donates $50,000 to the GoFundMe page of Naomi Oakes, a leukemia patient, in response to the eleven year old adopting Swift’s Bad Blood as her theme song for her hospitalization video.

To the beautiful and brave Naomi, I’m sorry you have to miss it, but there will always be more concerts. Let’s focus on getting you feeling better. I’m sending the biggest hugs to you and your family.

The Steinle family sets up a gofundme page (link) to support causes important to Steinle, including Challenged Athletes Foundation each year, which she worked for each year, and PAWS: the Performing Animal Welfare Society. CAF President:

What always impressed me about Katie was how genuinely she engaged herself with challenged athletes, how genuinely interested she was in their life, their tragedy, and guided them on how best to deal with that

A funding page for the six officers set up by The Fraternal Order of Police, a union representing Baltimore City police officers, is removed by the site. The page set a fundraising goal of $600,000 to pay for the living expenses of the six officers, who have been placed on unpaid suspension after they were charged in Gray’s death. In 41 minutes, the page raised $1,135. The FOP posts on its Facebook page:

Apparently our GoFundMe account has been suspended with no explanation. We are working to find a new site for donations. Thank you!

The fundraising website GoFundMe shuts down the donation page for the Kleins. The page had raised has more than $66,000 before being shut down. GoFundMe statement:

After careful review by our team, we have found the ‘Support Sweet Cakes By Melissa’ campaign to be in violation of our Terms and Conditions and have removed this campaign.

After being interviewed by Dana Loesch on her television show on Blaze TV, we learned that the family may never even reopen the doors to their restaurant as the death threats and vicious online reviews continue to pour in from the arbiters of “tolerance.” My name is Lawrence Jones, and I’m one of the television opinion contributors on Dana’s show. Before the televised interview the producers discussed the situation…We all agreed: this family needs help to get through this assault. So we set up a GoFundMe page with the modest goal of $25,000. The intent was to help the family stave off the burdensome cost of having the media parked out front, activists tearing them down, and no customers coming in.

What's this? This is an unbiased just-the-facts news timeline ('newsline') about GoFundMe, created by Newslines' contributors. Help us grow it by finding and summarising news. Learn more