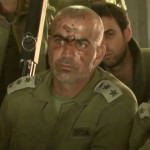 Commander Col. Rasan Alian says he will return to complete the elite Golani Brigade’s mission in the 2014 Gaza conflict after he is moderately wounded in an exchange of fire.

I want to go back to Gaza, and get to as many terrorists as possible

On heavy losses sustained by the unit:

I’d like to send a big hug to the bereaved families. I did not have a chance to meet them. We stand with them. They are strengthening us

Alian tells his soldiers that they have the support of Israel, as the elite unit joins the ground campaign of the 2014 Gaza conflict with a mission to ‘remove Hamas’ terrorist infrastructure and restore quiet to Israel.’

The Shabbath has just ended. Our nation is behind us, and it has great expectations for Golani. It expects us to weaken Hamas. I am certain that the Golani Brigade will succeed in this mission. Go ahead. Over.

A total of 13 Golani Brigade soldiers are killed in a single morning of operations in Gaza while brigade commander Col. Gen. Rasan Alian is moderately wounded in an exchange of fire and hospitalized in Soroka University Medical Center in Beersheba. A timeline released by the Israel Defense Forces:

1:05 a.m., an armored personnel carrier catches fire after an explosive device is set off under it. Seven soldiers are killed. Reportedly, the APC was not fitted with armor that could withstand this type of blast.

1:30 a.m., a soldier is killed when two soldiers get into a firefight with terrorists.

5:45 a.m., another Golani force gets into a firefight with terrorists. Two soldiers are killed.

8:50 a.m., three soldiers are killed when a Golani squad is caught inside a burning building. What's this? This is an unbiased just-the-facts news timeline ('newsline') about Golani Brigade, created by Newslines' contributors. Help us grow it by finding and summarising news. Learn more