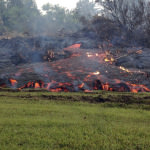 Denison University assistant geosciences professor Erik Klemetti assesses the options of stopping the lava flow for Wired magazine. Where a resident near Pahoa built an earth barrier to divert the flow, it has inflated and threatens to spill over the barrier, or flow onto someone else’s land. A lava flow in Iceland in 1973 was stopped by pumping water onto it and building barriers, but Pahoa doesn’t have the water supply. A controlled demolition of a building, like in the movie Volcano, won’t work, but the technique used in the film of diverting it through a channel could. Pahoa could potentially dig a channel to let the lava flow between buildings – although this would be difficult, and could create more damage than it prevents.

Russia Today airs footage provided by the County of Hawaii of the lava from Kilauea flowing across Apa’a Street on the edge of the town of Pahoa.