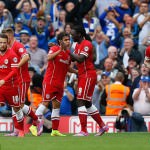 Chris Martin gives Derby an early lead when he pounces from close range in the 13th minute. Jeff Hendrick is taken off with what seems to be a serious arm injury and in the 52nd minute a free kick from Christophe Berra levels the game to a draw. As Derby presses hard in minutes of stoppage time Martin’s shot is deflected just wide. McClaren:

I felt it was a game overall we should have won. We probably caused our own problems – after we got the first goal we seemed to stop.Jeff [Hendrick] was six minutes down [injured] and it kind of killed the game in the first half.