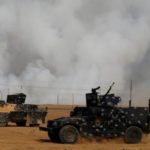 A sulphur plant in Mishraq is set on fire amid fighting between United States troops and the Islamic State in the Mosul region. The fire is releasing poisonous fumes, forcing American soldiers to wear gas masks.

US soldiers at a base near the northern Iraqi city of Mosul have donned protective masks against toxic fumes from a sulphur plant set alight in fighting with so-called Islamic State. They took the precaution after the wind blew smoke from the fire towards Qayyarah air field.