What's this? This is an unbiased just-the-facts news summary about 2014 Gaza Conflict, Gaza, Israel, Israel Defense Forces, extracted from the original article by Newslines' contributors. To see the newsline of each topic, click the links below. Learn more 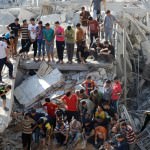 The number of Palestinian deaths rises to 1,903 as five people are killed in fresh airstrikes after the 72-hour truce window ends. Israel says 65 rockets have been launched from the Gaza strip by Palestinian factions, and it has responded with 63 strikes. Three people were killed in an attack on a mosque in the Nusseirat refugee camp and two when a motorcycle was hit in the Maghazi refugee camp, Gaza’s Health Ministry says.