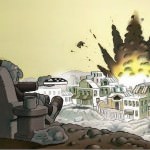 Fairfax Media apologizes for a cartoon considered anti-Semitic by Jewish groups that the Sydney Morning Herald published in its daily and online editions, and withdraws the online version. The cartoon, which showed an old man sitting alone in an armchair wearing a kippah skullcap and controlling the 2014 Gaza conflict by remote control, drew criticism from the New South Wales Board of Jewish Deputies due to its use of Jewish symbology and the fact that the old man has an unusually large nose, a genetic trait often associated with Jews. SMH:

It was also significant that the cartoon had its genesis in news photographs of men seated in chairs and lounges, observing the shelling of Gaza from the hills of Sderot. One of those photos depicted an old man, wearing a kippah, reclining casually as part of a group – with Mr Le Lievre seeing comparisons between this and someone watching their television

The Executive Council of Australian Jewry and the NSW Jewish Board of Deputies say the editorial ‘unreservedly apologising for the publication of an antisemitic cartoon’ means the matter is now closed.